Autocross — races on the soil ring route. Are popular in the former USSR as for participation of rather modified road car, and these races are rather spectacular:

Now in Russia competitions in an autocross on the converted ordinary cars are held.

Rally cross-country — group of disciplines of the automobile sports representing with – race fight in which the order of crossing of the finishing line and time of passing the distances passing on ring (closed) tras-of Sakha which part has a firm covering (asphalt, concrete, etc. is defining), and other part — without covering or with a bulk covering (soil, sand, krosh-, gravel, etc.).

Rally — a type of the auto racing which is taking place on opened or closed tracks on modified or specially constructed cars. It is a type of races differs that arrivals are mainly laid on public highways, in the format “from point A in point B” with passing of control points. Athletes go at the maximum speed only on specially blocked high-speed sites. And from one special stage to another rally drivers move, observing all traffic regulations and for strictly certain time standard. 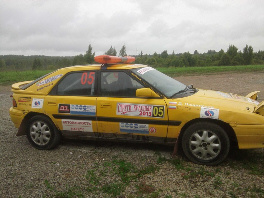